For me, the worst part of a marathon is not the running, it is getting up at 4 AM. But the weather was nice, clear sky and cold. SoCal cold, that is. So I packed my stuff and drove downtown. Here the problem started. Most of the freeway exits that were mentioned in the driving directions to the marathon site were closed; due to the marathon. Asking police and other officials blocking the streets to the marathon were also not very helpful, since they referred me to other roads that were also closed. Finally I got where I wanted to go,without seeing a single ‘Go-here-for-marathon-parking’sign. Is everyone just supposed to know his way around L.A.?

Having signed up with the L.A. roadrunners for training gave me access to a hotel directly next to the starting block, so the time directly before the race was quite relaxed. Drank some Gatorade, had a bagel with turkey breast and a coffee and actually enjoyed watching all the buzz and more-ore-less ridiculous marathon preparations and warm-up around me. Why would anyone do 200 sit-ups before a race, anyhow?

The race went well, I felt in great shape and the splits that my HRM showed me were better than expected. Or so I thought. Since I measure in km instead of miles, it took me until mile 15 to figure out that my speed sensor was somehow off be 10 percent. Tough luck. I tried to make up the time in the next 5 miles, then figured that I would not reach my target of 4:00 h and decided to take the last miles slow, since I don’t really have time for long recovery. Instead I motivated the folks around me that hit their wall and just enjoyed the race. Nutrition wise, I tried something different this time. Instead of the regular Gatorade, I switched to Gatorade Endurance (which was also the official drink) and I used Cliff blocks instead of my cliff bars and power-gel. The blocks aren’t really any better in my opinion, they just have a different taste and I am fed up on the bars. The difference in the drink is noticeably, though. Not so much in the race, but in recovery. A lot less post-race pain. That is definitely a keeper.

Overall time 4:17, which is still OK, although that speed sensor thing bugs me quite a bit.

Somehow the whole race gave you the feeling you were running not in LA but Mexico City, Mexican flags everywhere, and a great atmosphere. The water-stations were good, as can be expected for such a race. Thanks to all the volunteers. What really struck me –first as odd, later as overwhelming was the amount of people standing at the sidewalk, handing out all kind of stuff. Treats, Oranges, bottled water, you name it. These folks were not officials, they paid for the stuff with their own money, just to hand it out to complete strangers. And mostly in what you would probably not call the best neighborhoods. That is something that I have never (at least on that scale) seen in any other race. And I can not describe how thankful I am for that. Gracias, muchas gracias. Lance, there are gifts after all! And to my economics teacher: Can you explain that ‘homo oeconomicus’thing just one more time,please?

Two things about the race do need improvement: First of all,the finish. Dear planners of the L.A. Marathon, did anyone of you ever run a road race yourself? Apparently not. Otherwise you would never have come up with the idea to have the finish on an uphill road! How stupid is that. The last few meters, for so many thousands a dream-come-true. And due to such a grave design flaw they have to basically WALK up to the finish line. There is absolutely no reason for that. Change it.

Also,after the finish line ou have to walk three more block until you are actually let out of the gated area, just so that all the merchant get their chance for a little post-race rip-off. After 26 miles, I have a great urge for a burger and a beer, not for a finisher photo. So I would greatly appreciate it,if I could just get to my car without any prolonged walk and head straight for In’n'out. 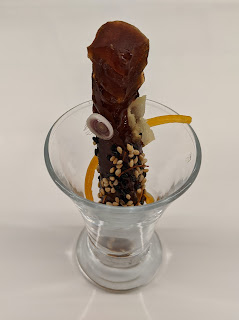